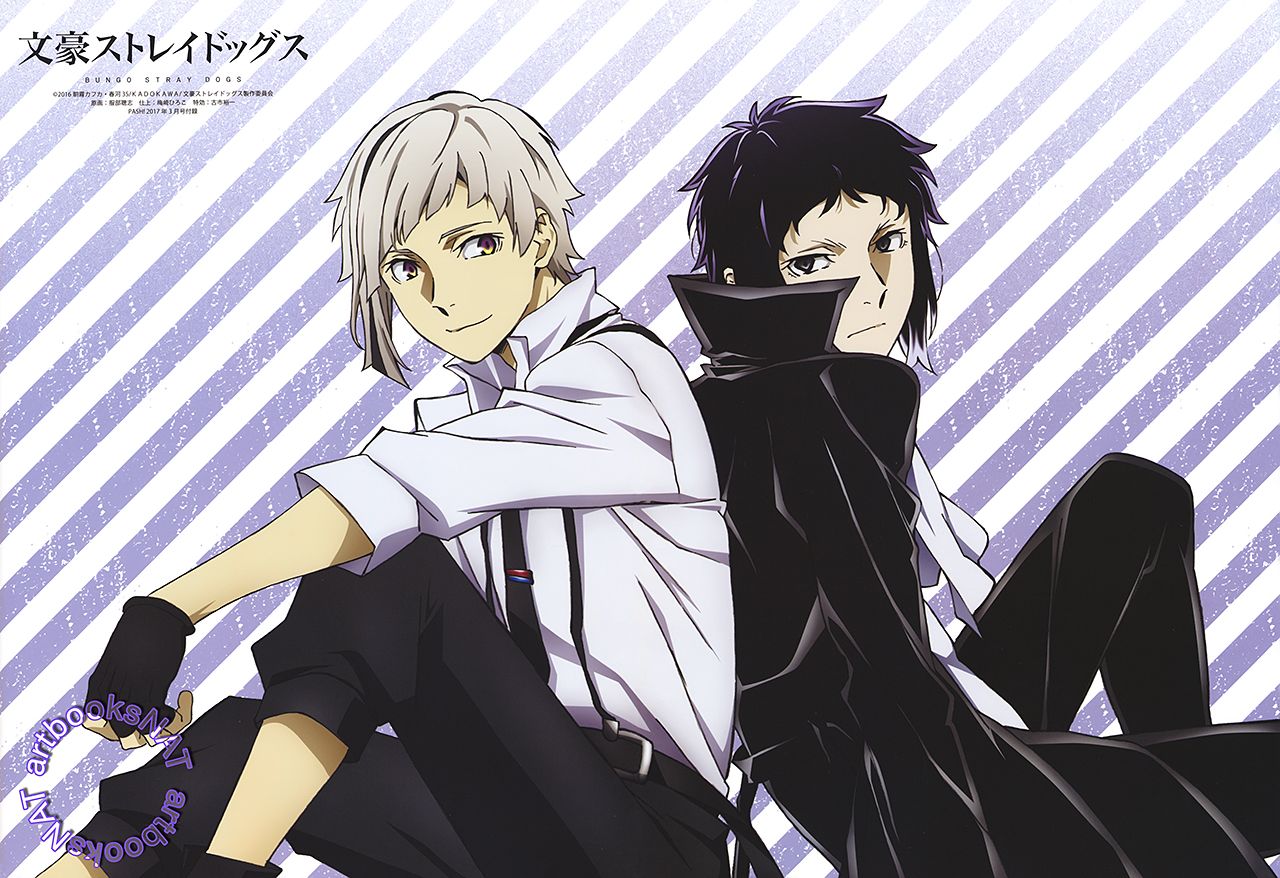 Shin Soukoku is the slash ship between Ryunosuke Akutagawa and Atsushi Nakajima from the Bungou Stray Dogs fandom.

Atsushi and Akutagawa’s relationship is one of the more important ones in the series, mirroring Chuuya Nakahara and Osamu Dazai’s relationship. Although they are enemies and in rivaling companies, they team up several times and use their abilities in sync to form an almost unstoppable team.

Atsushi, being Dazai’s current subordinate, is the main source of hatred from Akutagawa towards him as Dazai’s ex-subordinate. He is taunted by Dazai that he was never, and will never be better than Atsushi, which fills him with pure rage and malice for him.

Atsushi and Akutagawa’s first interaction is in the alleyway after being tricked by Ichiyo Higuchi, Akutagawa’s subordinate. Atsushi tries to fight back against Akutagawa, but his Rashoumon rips off his leg, making him scream in agony. Akutagawa begins to walk away, but Atsushi activates his ability and regenerates his leg, and a fight between the two ensues, which is soon stopped by Osamu Dazai.

Later on, as Atsushi is spending the day with Kyoka Izumi, a girl he saved from the Port Mafia, he is impaled in the chest unexpectedly by Akutagawa’s Rashomon and thrown into a truck, where he is brought to a cargo ship going out of the country. He tells Atsushi that even though there was a bounty on his head, his previous action was a genuine intention to kill him, but his regeneration ability is what kept him from being able to succeed. He tries to kill him again but is stopped by Kyoka, who he turns his attention towards. While he is facing away, Atsushi attacks Akutagawa and they enter another intense fight. In the end, Atsushi is able to escape the ship with Kyoka in tow.

After one of Akutagawa’s battles in The Guild Arc, the first thing he thinks of is Atsushi’s words of not understanding a person’s need to be told it’s okay for them to live.

Later in the same arc, Akutagawa boards the Moby Dick with the intent to kill Atsushi, who he soon comes face to face with, and they immediately engage in conflict. Akutagawa tells Atsushi that he doesn’t need him to try and understand him. He is tricked by Atsushi that Dazai wishes to talk to him, and, distracted, Atsushi gets away from him once more.

On top of the Moby Dick, Atsushi and Akutagawa, initially fighting each other and the enemy at the same time, work together to defeat Francis Scott Key Fitzgerald, the leader of the Guild before he can crash the Moby Dick into Yokohama. They use their abilities to support each other, working together to eventually defeat Fitzgerald and stop the Moby Dick from crashing.

During the Cannibalism arc, Dazai makes Atsushi and Akutagawa team up to catch Pushnik, the one behind the Cannibalism. Atsushi sees how focused Akutagawa is on completing his mission, the first one Dazai has given him in years and asks him a series of questions, his last one being «What did you have for dinner last night?» and, like all the previous questions, Akutagawa answers ‘yes’, showing he wasn’t paying any attention to Atsushi. Slightly annoyed, Atsushi continues protesting working with Akutagawa but Dazai tells him it’s the only way the Cannibalism will be stopped.

They get to the abandoned coal mine and enter undetected, but come face to face with two guards. They question them to find out information and end up in front of a door that they think leads to Fyodor, the one behind the whole charade. They realize that one of the guards is Pushnik, the one with the Cannibalism ability, and Atsushi pushes Akutagawa out of the way to protect him from getting shot by a bullet which ends up grazing him, infecting him with the cannibalism.

Pushnik runs away in a minecart, and Akutagawa sets one up for him and Atsushi as they follow after him. They crash because of an explosion, and Atsushi tells Akutagawa to get on as he activates his own tiger ability, running as Akutagawa complains about how uncomfortable it is to ride Atsushi. As they chase after Pushnik they continuously bicker as Akutagawa gives Atsushi directions, which he follows.

As they are about to catch Pushnik, they are intervened by Ivan, a person who can control earth, and they are forced to fight him. In the midst of their fight, Atsushi is also infected with the Cannibalism ability, connecting him and Akutagawa. Both weakened, they continue to fight but are eventually caught in a sort of quicksand, trapping them. Akutagawa asks Atsushi why he fights, and Atsushi tells him he already knows why, and in the last resort Akutagawa activates Rashoumon and passes it temporarily to Atsushi, who uses both of their abilities at once to defeat Ivan.

In the manga, during the Decay of Angels arc, just as Atsushi realizes he’s alone in facing Kamui, the leader of the Decay of Angels, Akutagawa sees smoke from the flare that Ranpo previously lit before being sent into Poe’s book. He goes to help Atsushi, activating Demonic Armor and fighting against Kamui, who quickly overpowers him. Before he’s hit, Atsushi grabs him and jumps out of the way. As the ship is sinking, Atsushi supports Akutagawa on himself as they begin to walk away, After arguing, they face Kamui again. Akutagawa joins Kamui to deceive him, he and Atsushi pretend to attack Akutagawa to pass the Rashomon to Atsushi who manages to kill Fukuchi, but he goes back in time and attacks the two, Akutagawa seeing that they couldn’t win the battle, active the skill by the shirt and takes the extinguisher from the ship, the two manage to escape but Kamui goes back in time again and cuts the extinguisher in half and cuts Akugatawa’s neck. Before dying, Akutagawa tells Atsushi to hurry up and smiles at him.

This section is in need of major improvement. Please help improve this article by editing it.

The ship is one of the most popular in the fandom, second only to Soukoku. It is the most written ship for both Akutagawa and Atsushi. It has many works on AO3, with over 3,000 works.